TELEMMGLPICT000228734180.jpeg Social media giants allowed misinformation about coronavirus to spread “virulently” across their platforms because duty of care laws are still not in place to regulate them, MPs say today. The Commons culture committee cited evidence of a range of harms from dangerous hoax treatments and anti-vaccination propaganda to conspiracy […]

Social media giants allowed misinformation about coronavirus to spread “virulently” across their platforms because duty of care laws are still not in place to regulate them, MPs say today.

The Commons culture committee cited evidence of a range of harms from dangerous hoax treatments and anti-vaccination propaganda to conspiracy theories that led to attacks on 5G engineers.

It said an online harms regulator must be appointed now to hold social media platforms to account and warned that until the proposed duty of care was introduced, internet companies would not be compelled to act.

MPs also accused the platforms of using business models which disincentivise action against misinformation while affording opportunities for some to monetise misleading content.

Julian Knight, chair of the committee, said: “We are calling on the Government to name the regulator now and get on with the ‘world-leading’ legislation on social media that we’ve long been promised.

“The proliferation of dangerous claims about Covid-19 has been unstoppable. The leaders of social media companies have failed to tackle the infodemic of misinformation.”

The report highlighted the spread of false claims online linking 5G to the virus, resulting in threats being made against telecoms engineers, as a clear sign of the dangers misinformation can pose.

It also said it had seen evidence of a serious public health impact from misinformation, with false claims about home remedies and cures for the virus meaning “some people have mistakenly turned to unproven home remedies, stopped taking ibuprofen and prescribed medicine, or elsewise ingested harmful chemicals such as disinfectant”.

MPs said the spread of financial scams online during the pandemic was further evidence of the Government needing to act sooner.

“Evidence that tech companies were able to benefit from the monetisation of false information and allowed others to do so is shocking. We need robust regulation to hold these companies to account,” Mr Knight said.

“The coronavirus crisis has demonstrated that without due weight of the law, social media companies have no incentive to consider a duty of care to those who use their services.”

The committee has called on the Government to publish draft legislation in the autumn, alongside its full consultation response to the Online Harms White Paper, if a finalised Bill is not ready. MPs said the final decision on a regulator should be made now.

Earlier this year the Government said it was “minded” to appoint Ofcom but had not yet confirmed that decision.

The committee has also called on ministers to set out a list of online harms to be covered in the legislation, rather than allowing internet companies to do so themselves of what they deem to be acceptable through their terms and conditions.

Its other recommendations include empowering the regulator to impose “significant” fines for non-compliance with the new rules.

The NSPCC’s head of child safety online policy Andy Burrows said: “The committee is right to be concerned about the pace of legislation and whether the regulator will have the teeth it needs to deliver the promise of Britain becoming the safest place in the world to be online.

“The Government must act with urgency and ambition to publish legislation this Autumn that protects users from all forms of harmful content.

“They must also ensure the independent regulator has the necessary ammunition, in the form of criminal sanctions, to enable it to succeed. Anything less will be failing young people.”

The MPs’ report comes as pressure is mounting on ministers to bring forward the long-promised duty of care legislation.

In May, Ian Russell, the father of the 14-year-old schoolgirl Molly Russell who took her life after viewing self-harm content on Instagram and other sites, accused the Government of “backsliding” over the protections.

On Monday, the Children’s Commissioner Anne Longfield called on ministers to “stop dragging their feet” and make the legislation a “key priority”.

She also said that a new regular must be armed with the powers to block sites from the UK if they repeatedly breached their duty of care, warning that a system of fines could be ‘easily absorbed’ by wealthy tech companies.

Her comments come after a Telegraph investigation found the Chinese social media giant previously had a policy of only suspending paedophiles caught grooming children from the site for a week.

During the inquiry into fake news, Facebook, Google and Twitter were lambasted by MPs for sending junior executives “unable to answer questions” on the coronavirus fake news epidemic.

All three tech giants had to send more senior executives for a second round of questioning by MPs.

A British city goes back under lockdown, but its neighbors don't

Tue Jul 21 , 2020
A woman walks past a boarded-up shop in downtown Leicester, England, on Tuesday June 30, 2020. (Rui Vieira / Associated Press) Thoroughfares are crowded in London once again, but not in Leicester. In Birmingham — Britain’s second-most-populous city — you can go to the office. Not so in Leicester, less […] 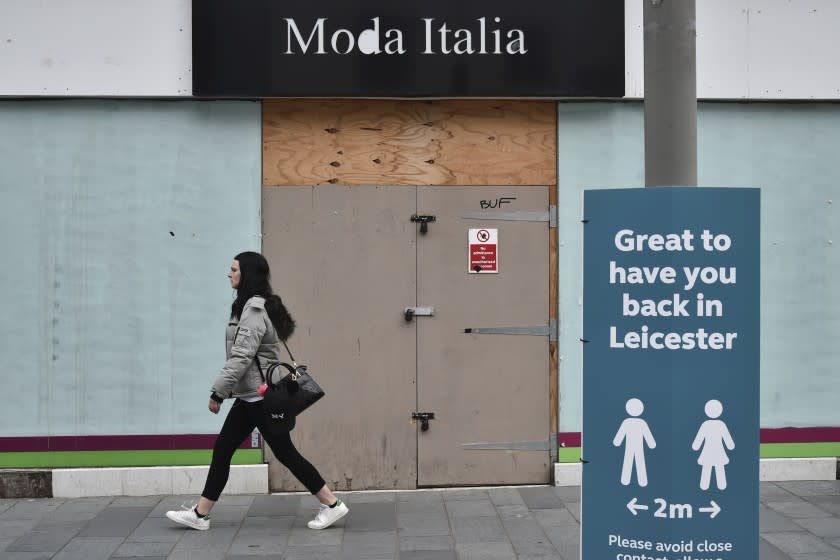