Thoroughfares are crowded in London once again, but not in Leicester.

In Birmingham — Britain’s second-most-populous city — you can go to the office. Not so in Leicester, less than 50 miles away.

In pubs across Liverpool, revelers can raise a glass. In Leicester? Not so much — a table blocked the entrance to the Barley Mow, a tavern near the city center.

“We’re a bit jealous of pubs in other cities,” a waitress told a visiting reporter. There was no table service service, she said, pointing to a sign advertising takeout pints of beer and sandwiches.

Such is life in Leicester, the first city in Britain to have a coronavirus lockdown reimposed since the country’s gradual emergence from its long confinement. While restaurants, bars, museums and hair salons in the rest of England were free to welcome customers again July 4, which followed the reopening of department stores and some other shops nearly three weeks earlier, in Leicester the process went into reverse.

With 10% of all positive COVID-19 cases in the country and an infection rate three times that of the next-highest city, British Health Secretary Matt Hancock ordered Leicester closed once more. Schools are shuttered again, gatherings of more than six people are banned and travel outside the city of some 342,000 people is discouraged.

“Some say that the local lockdown is unnecessary. I wish this were true,” Hancock said. “But sadly it remains vital for the health of everyone in Leicester, and the rest of the country, that these restrictions stay in place.”

Such local rollbacks of restored freedoms are becoming more common around the world as daily coronavirus infections mount to unprecedented levels. Both Beijing and Melbourne, two cities that thought they had tamed the curve, reimposed some controls amid new outbreaks. The northeast Spanish city of Lleida has reentered a full lockdown. India has re-quarantined the impoverished state of Bihar.

And across the U.S., officials in cities such as L.A., Houston and Miami have threatened to pause or rewind their cities’ reopening.

For Leicester residents, the renewed injunctions come as a bitter blow as they watch many of their fellow Brits reclaim some of the normality they used heedlessly to enjoy.

“It feels like that episode of ‘The Simpsons’ where they put a glass dome over Springfield,” said Gail Brown, co-owner of the Leicester Coffee House.

Beyond the economic turmoil, the outbreak here has raised questions about the pandemic’s stubbornly disproportionate effect on Britain’s minority and underprivileged communities. Leicester has both: It’s among the top 20% most-deprived areas in the country, according to the charity Save the Children, and about half its residents are from minority ethnic groups.

Other areas with similar demographics are also on the government’s radar for renewed lockdowns. Bradford, a city where almost 40% of the population is nonwhite, has the country’s second-highest infection rate.

That was no surprise, said John Wright, an epidemiologist and head of the Bradford Institute for Research Health.

“When all this was kicking off in February, we knew we would be severely affected. We have population density and lower-paid workers. The closer you are together, the higher the risk of transmission,” Wright said.

Residents of South Asian descent, who often tend to live in multi-occupancy and multi-generational homes, whether out of necessity or choice, are particularly at risk, he added.

Those inequalities come into sharp focus a little more than a mile outside Leicester’s center, in the dilapidated confines of the Imperial Building. Up its grime-encrusted stairs you find cramped clothing workshops hidden behind padlocked doors.

The building is part of the city’s textile industry, which is believed to include some 1,500 mini-factories churning out garments at rock-bottom prices for online retailers, including Boohoo, a fast-fashion company valued until recently at more than $6 billion.

Many lay the blame for Leicester’s high infection rates on that trade, which officials believe forces as many as 10,000 people — the grand majority of them immigrants — to work in almost slavery-like conditions, even through the nationwide lockdown.

Bashir, the Imperial Building’s landlord, who would give only his first name, insisted that businesses on the premises had just resumed work in June, in line with government guidelines. He did not confirm if they all had suspended operations again with the introduction of the local lockdown.

“The first lockdown was bad for companies here. Some of them received a grant but not all of them, so now with the second lockdown it feels like punishment. They’re suffering more than before,” he said, adding that many factory owners weren’t aware of the rules.

Authorities say they are unable to stop violators despite the abuse being an open secret.

“You have sweatshops, people paid £2 or £3 [$2.50 or $3.75] an hour, and we know it’s happening,” said Adam Clarke, Leicester’s deputy mayor. “But we have no legal authority to make sure people are working in a good way and not contracting COVID-19.”

He said that the City Council had tried to work with law enforcement but had encountered a bewildering network of agencies with different jurisdictions. The problem is still unsolved despite the urgency.

“What we need to do is ensure our over-fragmented system is simplified and the systems of government work to prevent the situation that’s happening just down the road,” Clarke said.

But even the phrase “down the road” comes with complications. The new local lockdown stops at Leicester’s city limits and does not extend into the surrounding area of Leicestershire county. That has led to a situation where one end of a street could be under lockdown while the other end is clear.

The painful effects of re-confinement are clear in Leicester’s normally bustling center.

“It’s a ghost town now. On June 15, we opened up everything, but when they announced the local lockdown it was a shock. We weren’t prepared,” Rakesh Parmar, the owner of Ye Olde Sweet Shoppe, said as he pointed to jars of brightly colored candies.

The shop has been in operation for more than 80 years, 31 of them with Parmar’s family. Parmar, 37, has been relying on online orders, but the volume was nowhere near what he was used to.

“We’ve already missed out on Easter, on Mother’s Day, on Eid,” he said.

It was a similar story at Leicester Market, which for seven centuries has drawn innumerable merchants to what some say is Europe’s largest covered market. It now stands mostly deserted, save for a few traders hawking bowls of fruits and vegetables.

“In normal days this place is full, but now we’re doing 10 hours for nothing. It just doesn’t feel justifiable. A lot of traders don’t see the point,” said Josh Lunn, a 29-year-old working for his grandfather’s fruit and vegetable trading business.

“We came out of national lockdown and finally started to have work. Then the minute Leicester got mentioned in the news, it ended overnight. The wheels started moving again, then ground to a halt.”

“Leicester’s been made an example of, and the damage has been even greater,” said Clarke, the deputy mayor.

“It feels cruel, not only to me as an elected official, but to those people who are talking to me. They feel the city has been very badly served.”

Tue Jul 21 , 2020
AUSTIN, Texas — Amid growing angst among parents and educators, the Texas Education Agency softened its stance on in-person instruction mandates as schools navigate around the coronavirus pandemic. The agency issued new rules Friday that give local school districts more control over the decisions on start dates and on how […] 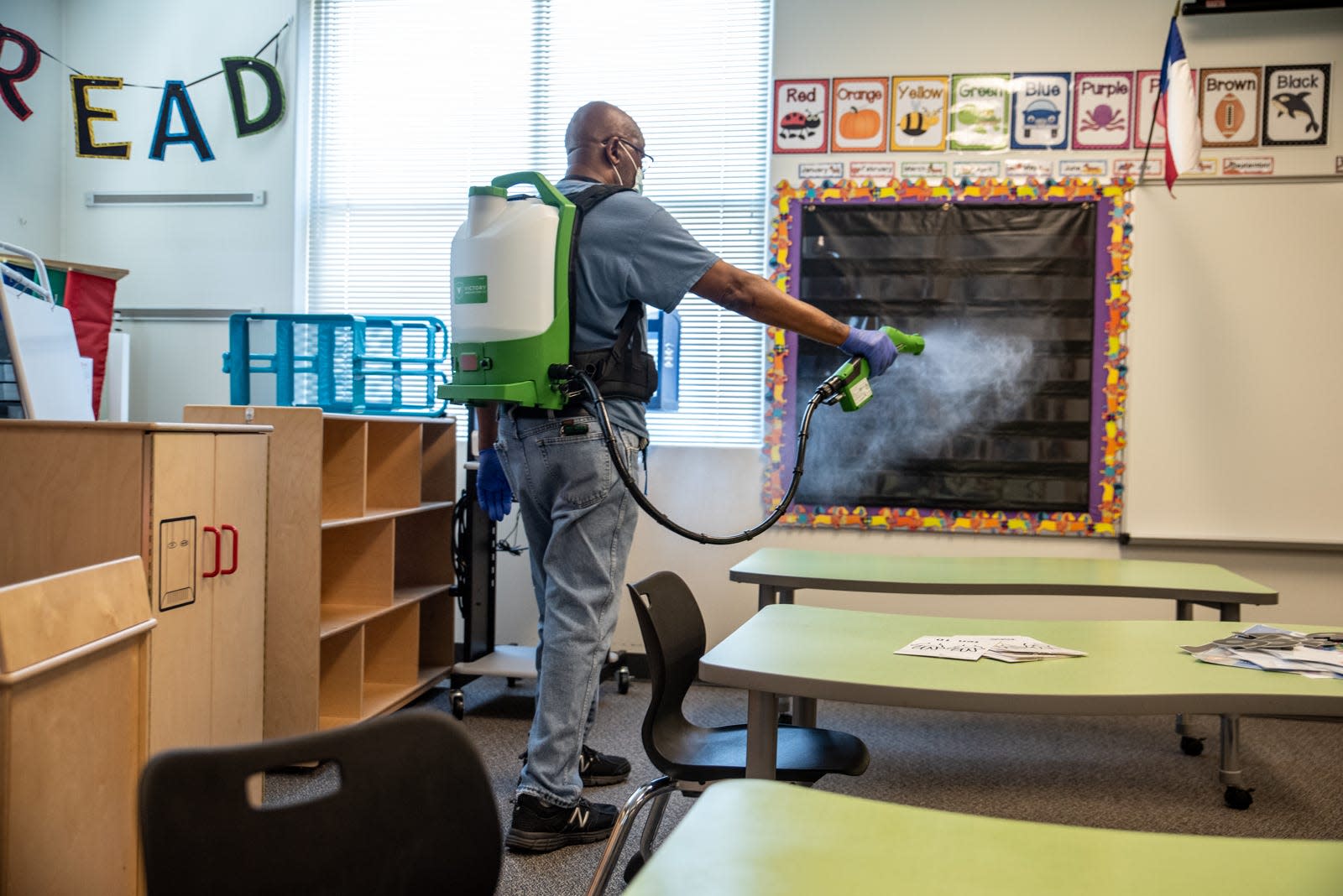