The anecdotes are alarming. A woman in Los Angeles seemed to recover from COVID-19 but weeks later took a turn for the worse and tested positive again. A New Jersey doctor claimed several patients healed from one bout only to become reinfected with the coronavirus. And another doctor said a second round of illness was a reality for some people, and was much more severe.

These recent accounts tap into people’s deepest anxieties that they are destined to succumb to COVID over and over, feeling progressively sicker, and will never emerge from this nightmarish pandemic. And these stories fuel fears that we won’t be able to reach herd immunity — the ultimate destination where the virus can no longer find enough victims to pose a deadly threat.

But the anecdotes are just that — stories without evidence of reinfections, according to nearly a dozen experts who study viruses. “I haven’t heard of a case where it’s been truly, unambiguously demonstrated,” said Marc Lipsitch, an epidemiologist at the Harvard T.H. Chan School of Public Health.

Other experts were even more reassuring. While little is definitively known about the coronavirus just seven months into the pandemic, the new virus is behaving like most others, they said, lending credence to the belief that herd immunity can be achieved with a vaccine.

It may be possible for the coronavirus to strike the same person twice, but it’s highly unlikely that it would do so in such a short window or make people sicker the second time, they said. What’s more likely is that some people have a drawn-out course of infection, with the virus taking a slow toll weeks to months after their initial exposure.

People infected with the coronavirus typically produce immune molecules called antibodies. Several teams have recently reported that the levels of these antibodies decline in two to three months, causing some consternation. But a drop in antibodies is perfectly normal after an acute infection subsides, said Dr. Michael Mina, an immunologist at Harvard University.

Many clinicians are “scratching their heads, saying, ‘What an extraordinarily odd virus that it’s not leading to robust immunity,’ but they’re totally wrong,’” Mina said. “It doesn’t get more textbook than this.”

Antibodies are not the only form of protection against pathogens. The coronavirus also provokes a vigorous defense from immune cells that can kill the virus and quickly rouse reinforcements for future battles. Less is known about how long these memory T cells persist — those that recognize other coronaviruses may linger for life — but they can buttress defenses against the new coronavirus.

“If those are maintained, and especially if they’re maintained within the lung and the respiratory tract, then I think they can do a pretty good job of stopping an infection from spreading,” said Akiko Iwasaki, an immunologist at Yale University.

Megan Kent, 37, a medical speech pathologist who lives just outside Boston, first tested positive for the virus March 30 after her boyfriend became ill. She couldn’t smell or taste anything, she recalled, but otherwise felt fine. After a 14-day quarantine, she went back to work at Melrose Wakefield Hospital and also helped out at a nursing home.

On May 8, Kent suddenly felt ill. “I felt like a Mack truck hit me,” she said. She slept the whole weekend and went to the hospital Monday, convinced she had mononucleosis. The next day she tested positive for the coronavirus — again. She was unwell for nearly a month and has since learned she has antibodies.

“This time around was a hundred times worse,” she said. “Was I reinfected?”

There are other, more plausible explanations for what Kent experienced, experts said. “I’m not saying it can’t happen. But from what I’ve seen so far, that would be an uncommon phenomenon,” said Dr. Peter Hotez, dean of the National School of Tropical Medicine at Baylor College of Medicine.

Kent may not have fully recovered, even though she felt better, for example. The virus may have secreted itself into certain parts of the body — as the Ebola virus is known to do — and then resurfaced. She did not get tested between the two positives, but even if she had, faulty tests and low viral levels can produce a false negative.

Given these more likely scenarios, Mina had choice words for the physicians who caused the panic over reports of reinfections. “This is so bad, people have lost their minds,” he said. “It’s just sensationalist click bait.”

In the early weeks of the pandemic, some people in China, Japan and South Korea tested positive twice, sparking similar fears.

South Korea’s Centers for Disease Control and Prevention investigated 285 of those cases and found that several of the second positives came two months after the first, and in one case 82 days later. Nearly half the people had symptoms at the second test. But the researchers were unable to grow live virus from any of the samples, and the infected people hadn’t spread the virus to others.

“It was pretty solid epidemiological and virological evidence that reinfection was not happening, at least in those people,” said Angela Rasmussen, a virologist at Columbia University in New York.

Most people who are exposed to the coronavirus make antibodies that can destroy the virus; the more severe the symptoms, the stronger the response. (A few people don’t produce the antibodies, but that’s true for any virus). Worries about reinfection have been fueled by recent studies suggesting that these antibody levels plummet.

For example, a study published in June found that antibodies to one part of the virus fell to undetectable levels within three months in 40% of asymptomatic people. Last week, a study that has not yet been published in a peer-reviewed journal showed that neutralizing antibodies — the powerful subtype that can stop the virus from infecting cells — declined sharply within a month.

But other work suggests that the antibody levels decline — and then stabilize. In a study of nearly 20,000 people posted to the online server MedRxiv on July 17, the vast majority made plentiful antibodies, and half of those with low levels still had antibodies that could destroy the virus.

“None of this is really surprising from a biological point of view,” said Florian Krammer, an immunologist at the Icahn Mount Sinai School of Medicine who led that study.

Mina agreed. “This is a famous dynamic of how antibodies develop after infection: They go very, very high, and then they come back down,” he said.

He elaborated: The first cells that secrete antibodies during an infection are called plasmablasts, which expand exponentially into a pool of millions. But the body can’t sustain those levels. Once the infection wanes, a small fraction of the cells enters the bone marrow and sets up shop to create long-term immunity memory, which can churn out antibodies when they’re needed again. The rest of the plasmablasts wither and die.

In children, each subsequent exposure to a virus — or to a vaccine — boosts immunity until, by adulthood, the antibody response is steady and strong.

What’s unusual in the current pandemic, Mina said, is to see how this dynamic plays out in adults, because they so rarely experience a virus for the first time.

Even after the first surge of immunity fades, there is likely to be some residual protection. And while antibodies have received all the attention because they are easier to study and detect, memory T cells and B cells are also powerful immune warriors in a fight against any pathogen.

A study published July 15, for example, looked at three different groups. In one, each of 36 people exposed to the new virus had T cells that recognize a protein that looks similar in all coronaviruses. In another, 23 people infected with the virus that causes severe acute respiratory syndrome, or SARS, in 2003 also had these T cells, as did 37 people in the third group who were never exposed to either pathogen.

“A level of preexisting immunity against SARS-CoV-2 appears to exist in the general population,” said Dr. Antonio Bertoletti, a virologist at Duke NUS Medical School in Singapore.

The immunity may have been stimulated by prior exposure to coronaviruses that cause common colds. These T cells may not thwart infection, but they would blunt the illness and may explain why some people with COVID-19 have mild to no symptoms. “I believe that cellular and antibody immunity will be equally important,” Bertoletti said.

Vaccine trials that closely track volunteers may deliver more information about the nature of immunity to the new coronavirus and the level needed to block reinfection. Research in monkeys offers hope: In a study of nine rhesus macaques, for example, exposure to the virus induced immunity that was strong enough to prevent a second infection.

Barouch and other experts rejected fears that herd immunity might never be reached.

“We achieve herd immunity all the time with less-than-perfect vaccines,” said Dr. Saad Omer, director of the Yale Institute for Global Health. “It’s very rare, in fact, to have vaccines that are 100% effective.”

A vaccine that protects just half the people who receive it is considered moderately effective, and one that covers more than 80% highly effective. Even a vaccine that only suppresses the levels of virus would deter its spread to others.

The experts said reinfection had occurred with other pathogens, including influenza, but they emphasized that those cases were exceptions, and the new coronavirus was likely to be no different.

“I would say reinfection is possible, though not likely, and I’d think it would be rare,” Rasmussen said. “But even rare occurrences might seem alarmingly frequent when a huge number of people have been infected.”

This article originally appeared in The New York Times.

US deaths surpass 1,000 for second straight day, jobless claims rise for first time since March; baseball is back

Thu Jul 23 , 2020
The daily U.S. death toll surpassed 1,000 for the second straight day and hospitalizations were again peaking as the paralyzing coronavirus pandemic showed little sign of easing Thursday. The Johns Hopkins University data dashboard reported 1,195 U.S. deaths Wednesday, high by standards of recent weeks but still only half of the […] 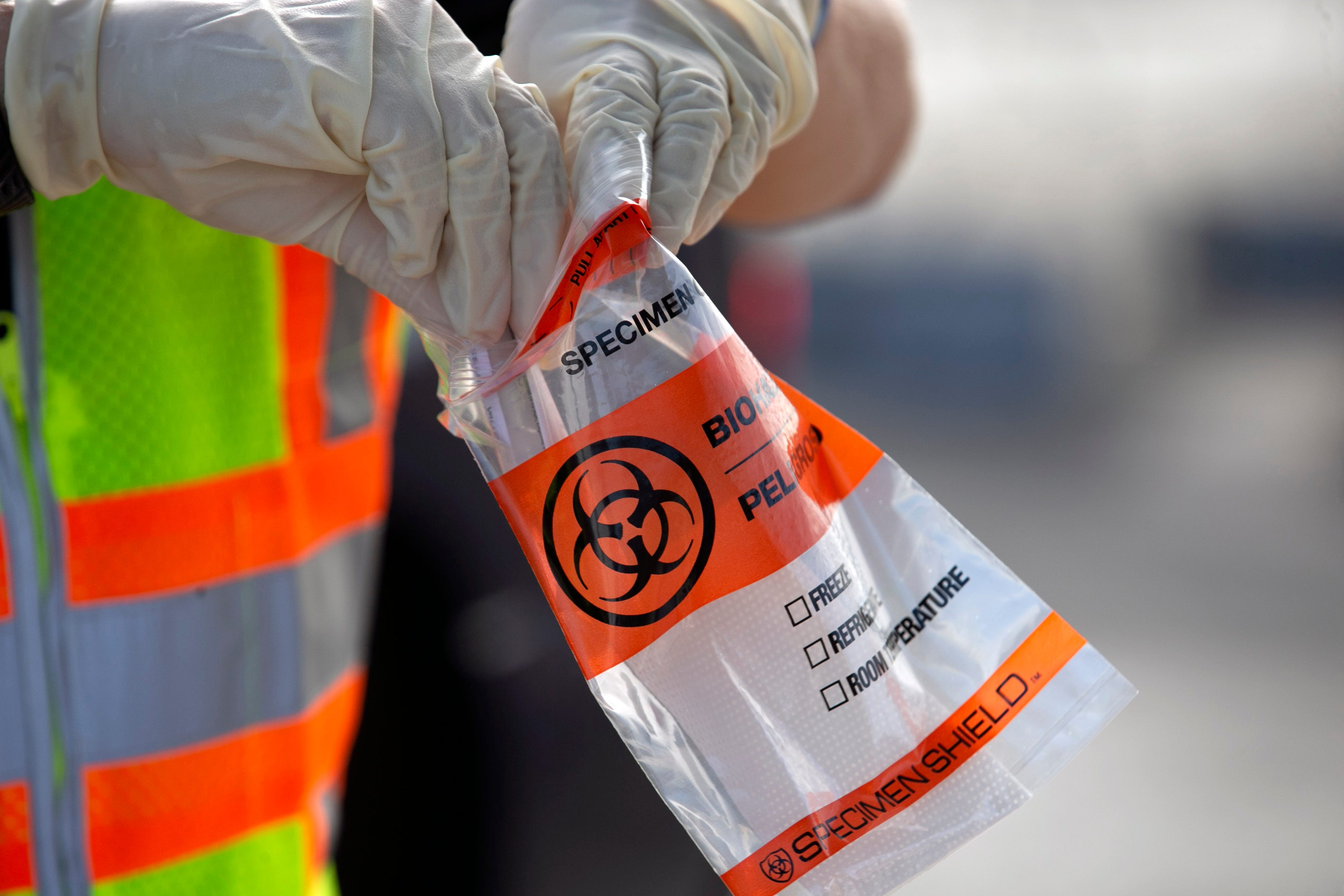