More than 25 million Americans are about to lose most of their income thanks to the looming expiration of the $600-per-week expanded federal unemployment benefits.

Congress created the extra benefits in March so that people who lost their jobs because of the coronavirus pandemic would be able to stay home and not feel desperate to go out and make money, as social distancing remains the best way to fight the contagion.

But lawmakers set the benefits to expire on July 31 ― a policy choice that will result in an across-the-board collapse of incomes and reverberate through the economy if it is not renewed. Many workers will receive their final federal checks next week with rent and mortgage payments coming due.

Jami Janes of Meadow Vista, California, worked as a server in a restaurant before the pandemic shut things down in March. She said 10 weeks lapsed between when she filed for unemployment and when she started receiving the extra $600, a major boost to the $269 she gets in state benefits.

“I could pay my rent, I could pay the electricity,” Janes, 53, said in an interview. “It’s not like we’re rolling around in money.”

If Congress drops the benefits, Janes will still receive her state benefits. But they won’t cover her expenses, so she’ll have to pull out her credit cards and cross her fingers.

“I will just start to live off the credit, which really sucks,” Janes said. “I just got out of debt last year.”

As state and local governments started shutting down schools and businesses earlier this year, Congress passed a $2 trillion relief package that included the unemployment benefits, bailouts for businesses big and small, plus direct rebate payments to most households.

State benefits average about $360. Democrats pushed for the extra $600 to try to make up the difference between the average unemployment benefit and the average weekly wage.

The Committee for a Responsible Federal Budget estimated that business closures and job losses shrank people’s work incomes by as much as 9% from February to May, but that thanks to the new government spending ― especially the extra unemployment benefits and the rebates ― people’s overall incomes actually rose by 5%.

The expiration of the extra benefits, however, will crater incomes by 4% from current levels in August, and 2% from February levels. The CRFB, which opposes excessive government deficits in nonemergency situations, described the spending cut as an “income cliff” ― one that would occur in what is clearly a national emergency.

“Two percent doesn’t seem like that much, but that’s a one-month drop,” the CRFB’s Marc Goldwein said. “In a normal year income grows 4% over the entire year.”

The Congressional Budget Office has said that letting the benefits lapse would probably reduce growth this year.

(A separate federal expansion of unemployment benefits, including to independent contractors, will not expire until the end of the year.)

If Republicans are feeling a sense of urgency about the situation, they haven’t acted like it. Senate Majority Leader Mitch McConnell (R-Ky.) pumped the brakes on another round of fiscal stimulus in April, even as House Democrats pressed ahead with the passage of another $3 trillion relief measure that would have extended benefits through the end of the year.

Now, with the expiration of key safety net programs only days away, Senate Republicans can’t even seem to agree among themselves on what their opening offer ought to be in negotiations with the Democrats. During a closed-door GOP lunch on Tuesday, several senators vented about the party’s strategy and the cost of the forthcoming proposal, which is expected to be unveiled this week.

“They’re talking about spending another trillion dollars. It’s fiscally irresponsible and they should be ashamed of themselves,” Sen. Rand Paul (R-Ky.) told reporters afterward.

But on Wednesday, Republicans began conversations with the White House about passing a bill solely focused on preserving the extra benefits in some form until Congress reaches a deal on the broader package.

“The question is length and price in total dollars,” Sen. John Barrasso (R-Wyo.) told reporters. In the aftermath of the Great Recession a decade ago, Congress repeatedly approved short-term reauthorizations of extended benefits, sometimes allowing benefits to lapse for weeks.

The Congressional Budget Office projected that the extra $600 would cost $176 billion from April through July, a tiny fraction of the total cost of the broader coronavirus legislation. There may be less interparty disagreement about keeping some amount of extra jobless pay than other issues, such as school funding and shielding employers from coronavirus-related lawsuits.

Republicans and even some Democrats have previously talked about keeping the extra benefits, but at a lower weekly dollar amount.

In a speech on the Senate floor on Wednesday, Senate Minority Leader Chuck Schumer (D-N.Y.) slammed Republicans as “disorganized” and “unprepared,” warning their dithering would harm Americans who won’t be able to afford to pay bills or rent next month.

“They can barely cobble together a partisan bill in their own conference,” Schumer said.

Unless lawmakers start to rush, Congress almost certainly won’t act on a broader bill before major portions of the CARES Act expire at the end of the month, including a moratorium on evictions and foreclosures in federally funded housing. Even if the Senate can get its act together before July 31, the House would need to sign off before sending a bill to the president’s desk, something that is likely to bleed into the first few weeks of August.

The coronavirus case count is now surging in most states across the country, and economists worry that the recovery of jobs lost from the initial lockdown layoffs has begun to stall. Republicans have been preoccupied with the possibility that high jobless pay prevents people from returning to work, though there’s not much evidence that the extra benefits are holding back hiring on a large scale.

Janes said she returned to her job waiting tables in June when Placer County allowed restaurants to reopen. She said business tapered off after three weeks and she returned to unemployment. It wasn’t clear how people were supposed to abide by social distancing and other public health guidelines inside a restaurant, she said. The county has seen a surge of coronavirus cases since the beginning of June.

“It is impossible to be safe dining out,” she said.

Wed Jul 22 , 2020
The U.S. government has placed an initial order for 100 million doses of a vaccine candidate being developed by Pfizer and a German firm, BioNTech, for $1.95 billion, the companies announced Wednesday. The U.S. can acquire up to 500 million additional doses, the statement said. Meanwhile, federal unemployment benefits are taking a hit […] 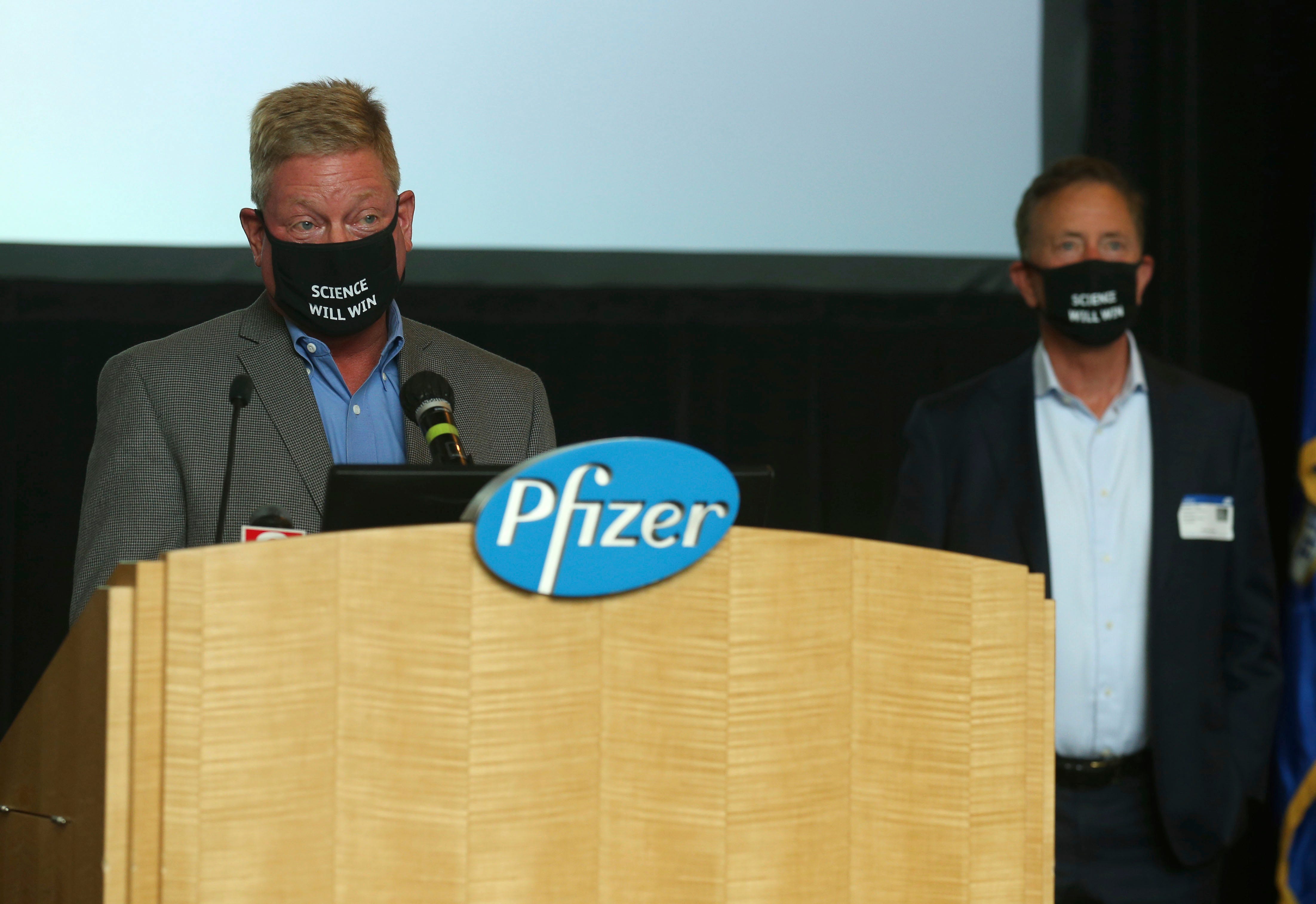