Kids, don’t try this at home.

The girl then smeared the resulting paste on her face like a mask as a cure for acne.

Almost every doctor contacted by Healthline used the term “bad idea” when hearing about the video.

“This is a bad idea,” Dr. Susan Bard, a board certified dermatologist and instructor at Weill Cornell Medicine and Icahn School of Medicine at Mount Sinai in New York City, told Healthline. “Aspirin is known for its anti-inflammatory properties. While aspirin — acetylsalicylic acid — appears to be the same as salicylic acid used to treat acne, they are different molecules.

“It’s important to realize that aspirin is an acid and that applying such acid in an unregulated concentration can lead to chemical burns, dryness, and irritation,” she added.

The video shows Le taking two uncoated aspirin and dissolving them in water.

After she spreads the concoction on her face, she advises viewers to leave it on for 3 minutes before rinsing it away. She recommends users do so every few days.

The video was viewed 1.3 million times after being on TikTok for only 2 days.

“Using aspirin for the treatment of acne is a bad idea,” Dr. Yoram Harth, a board certified dermatologist and a former research fellow at New York-Presbyterian/Columbia University Medical Center in New York, told Healthline.

“Aspirin… is an oral medication used to reduce pain, fever, or inflammation. It cannot unclog the skin pores, cannot reduce sebum excretion, and has no proven effect on the prevention of future acne breakouts,” Harth said.

Even if it did, diluting it in water would likely render it useless.

Harth said one of the main advantages of salicylic acid in treating acne is that it’s fat soluble, which allows it to penetrate through skin to get to the skin’s oil glands, where it unclogs pores and reduces oil production.

“Aspirin is soluble in water, a significant downside for the ‘anti-acne’ product,” Harth said. “Acetylsalicylic acid, especially when used in a DIY mask, can be irritating and lead to redness and flaking. It isn’t really treating or preventing breakouts. Used in a mask, aspirin can be absorbed into the blood circulation and cause systemic side effects in people who are allergic to ibuprofen, or naproxen aspirin can trigger bronchospasm.”

Harth said children taking aspirin for what it’s designed should still be careful, especially those with flu symptoms.

“Salicylic acid, benzoyl peroxide treatment, and retinol-based treatment creams (have been) used for decades in acne treatment,” Harth said. “They are effective, safe, and very affordable. Don’t bother crushing up aspirin and spreading it on your face. It will only do more harm than good.”

Dr. Amir Karam, a plastic surgeon in San Diego and a TikTok contributor, told Healthline that people using do-it-yourself chemical peels can’t control the concentration of what they’re putting on their face.

“Making your own chemical peel is generally a bad idea… concentration is what allows the practitioner to know how deep the peel is going,” Karam said. “A highly concentrated chemical peel will create a physical burn to the skin and lead to scarring.”

Even if aspirin did work on acne — and it doesn’t — the DIY approach is inherently flawed, unless the user is a medical professional.

“Chemical peels really require an understanding of how the skin is responding to a chemical agent,” Karam said. “Once the skin has reached a point of potential danger, the practitioner will use a neutralizing agent to restore the skin to its safe limits, as opposed to allowing a peel to go deeper. Also, using multiple passes of a chemical peel can make the peel go deeper and deeper, and once you cross the mid-dermal layer, that’s the point of no return when it comes to skin healing.”

While many legitimate health professionals use TikTok as a way to reach the video-sharing service’s young target audience, it can be just as dangerous.

Viral challenges showing and encouraging kids to do things like the “skull breaker challenge” (depicting people tripping someone so they hit their head) has resulted in serious injuries.

“Science has largely been replaced by popular opinion for a large portion of the population,” Pierre told Healthline. “With information overload and no way to properly assess it, people are being led astray.

“Millions of voices are now easily heard and everyone fancies themselves an expert, especially if they have millions of followers,” Pierre said. “Most of these individuals are posers with no formal training or experience in anything skin related.”

There’s a safe way for parents to make sure kids aren’t hurting themselves: Do some research and ask the right people, said Dr. Sophia Yen, a clinical associate professor of pediatrics at Stanford Medical School in California.

“Educate kids that what you’re seeing is not safe or effective,” Yen told Healthline. “If your child has a concern or is unsure what may or may not be safe, have them check with their parents and doctors.”

Unemployment Benefits Are at Heart of a Debate Over Hiring

Wed Oct 7 , 2020
Within two or three days of the benefit’s expiration, he said, applications tripled. When the government approved the $300 replacement, he said, the numbers began to dwindle, even though most states have yet to start making the payments. “It’s free money, so they feel they don’t have to work anymore,” […] 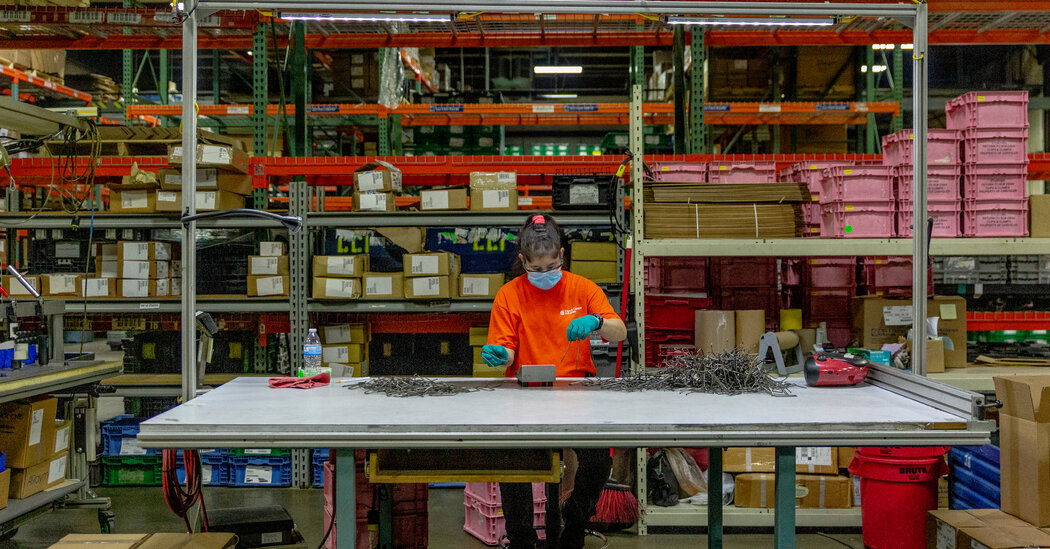